What Do They Eat in Iceland?

What Do They Eat in Iceland?

Whether you are on a strict diet or just naturally curious about what kind of food is served in Iceland, I’ve got you covered!

I traveled to Iceland in February of 2018, and as someone who “eats everything minus Yuca and Fried Plantains” I went into the trip with an open mind.  The short trip was so fun that I actually went back for a full week in June of 2018, so I’ve been updating this content as I continue to try to be the best travel advisor on the planet!

I’ll remind you that if you are in the beginning of planning your trip to Iceland, you are headed to an iconic country that is simply one of a kind.  You will fall in love with how different it is from anywhere else I’ve been in the world.

If you are adventurous, take a look at my guide to planning a trip to Iceland.

What sorts of food is consumed in Iceland, exactly?   Well, this is entirely up to you, because there are many options that you will be familiar with, but if you are like me, and want to live like a local, you’ll go all out and try some of the local dishes.

I’m going to start with foods I actually tried, and then delve into mentioning the ones I didn’t try.

Let’s start with skyr, because it’s something you’ll see over there and you’ll think it’s yogurt.  It’s not, but it’s got the same type of texture.  As a sort of soft cheese, skyr is made from gelatinous milk curds.  The texture and feeling on your tongue is much like that of yogurt, although it has a bit of a sour cream after taste to it, in my opinion.  I didn’t consume a ton of it, because I reserved my mornings for the fine pastries at the Sandholt, which you can see below.

It’s worth noting that they eat skyr at all times of the day, sort of like how the Vietnamese enjoy a bowl of Pho.

What’s worth mentioning about skyr is that it’s high in protein and very low in fat and carbs.  Ironically, I noticed it just hit the shelves at my local South Florida Whole Foods.  Being rich in vitamins and calcium doesn’t hurt the body, I suppose.

Next, I went into Kjötsúpa, which essentially is a meat soup.

This was my absolute JAM.  Small pieces of meat are lumped together with rice, carrots, onions, potatoes, and herbs.  Typically this is boiled for several hours prior to being served, but like the chili I was served during cold Minnesota winters, the locals like it’s flavor even more after letting it sit for a day and re-heating it.

Speaking of things that I enjoy, the pylsa is what they call the local hot dog.  You can find my review of the best hot dog stand in Europe to find out more!

Made with a hint of lamb in addition to the normal beef or pork, the real magic is in the sauce.  You can see me pigging out on this delicious flavor, with fried, crispy online rings and all, on the image below.

Served with brown mustard, ketchup, the aforementioned friend onion crisps, and a sauce made from mayo and relish, this would be a hit in any baseball stadium in the USA.

“Get your Icelandic hot dogs here.  Right here, with a cold Viking Beer.”

Speaking of the Viking Beer, it’s the local lager that you’ll find around town.  Being a Minnesota Vikings fan, I wanted this beer to be awesome, however, it was something that tasted like any lager you can find on tap anywhere.  It’s very similar to a Miller Lite, which actually may be appealing to many people.  In a day and age with craft beer being so abundant, the classic beers, like Viking, are just hard to stomach unless it’s the only option.  That said, I had many of them, because growing up a beer drinker, I will always opt for a cold one after a hard day of work.

By the way, you will need a passport to visit Iceland. If you need one, or need to rush one, use the service below:

If you need a passport or travel visa for ANY country, and need to expedite it, there is one service I can highly recommend over any other service:  Click this link ——> IVisa.

Our big night out at the expensive place in town was spent at Grill Market.

You may not believe it, but according to our server, “horse” was the dish people ate when they were celebrating something special.  Well, I’ve never been one to shy away from celebrating the sun coming up, so I dove right in and ordered this bad boy rare.  Horse tenderloin, ladies and gentlemen, ranks right up there with the best filet mignon or ribeye you’ve ever had.  Take a look at the exact piece that I ordered.  Clean muscle, lean, and tasty.  (Scroll down for a picture of it served.)

(I got horse at this restaurant for all inquiring minds:  https://www.allworld.com/grillmarkadurinn-restaurant-review-iceland/)

While I am happy to report that eating Mr. Ed was something that satisfied my stomach, eating Hákarl  (dried fermented Shark) was something I’ll not run back to repeating.  The smell of it alone is enough to steer most people away from it, and unless you like drinking cleaning products or rubbing alcohol, you probably won’t enjoy this dish.

In fact, I did some research, and while I didn’t see the show, Anthony Bourdain calls fermented shark:

I had the Hákarl  as part of the “Icelandic Braveheart” dish.  You get a shot of Brennivín to wash it down, so how bad could it be?  Brennivín is like Sambuca, and the locals call it “black death.”

Well, I wish they gave me a fifth to wash it down, or maybe even an entire bottle.  To me, it was like taking a small scallop, pouring Drano on it, soaking it, and eating it.  I found out that eating fresh shark could poison you, which is the reason the curing process, which consists of burying the shark underground for 6-12 weeks, followed by hanging it to dry an additional 4-5 months, is so long.

While I didn’t eat an entire meal of it, puffin was a nice little bird to eat.  Eating them on a slider was quite delightful. 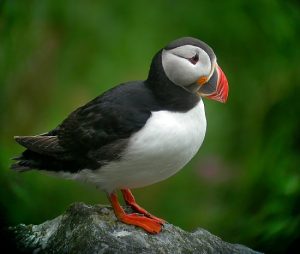 This cute little bird is great on a toasted bun with sauce!

Minke Whale was as I expected – blubbery.  It had a nice taste to it, but unlike horse, wasn’t very lean.  Again, totally expected.  I ate this as a dish and on a slider.

Svið is the sheep’s head, and it’s not available publicly at restaurants, but you can find it in people’s homes and it’s typically well received.  After singing the head to get rid of all the hair, the head is brained and boiled.  You’ll find this served with mashed turnips and potatoes as well as some rhubarb jelly for good measure.  A real Viking will eat the face, eyeballs and all.  Again, it gets really good reviews, so don’t think of this as something you used to see on Joe Rogan’s Fear Factor.  If given the opportunity, I would have dove right in, just for the story.

Another food I didn’t get to eat was Hrútspungar  (Rams testicles).  The story goes that in the poverty ridden times of Iceland, the thought process people had was to not be wasteful.  As it turned out, they really didn’t waste anything, so Ram’s balls were saved, pressed, pickled, and eaten.   You really can’t make this stuff up, and for the sake that there may be children reading about Iceland for school work, I’m not going to insert a pic of Ram’s testicles here in any fashion.

Be ready for a ton of bread.  A lot of dark rye, in fact.  However, unlike in the USA, the bread is gluten free and much better for you.  I figured I’d bloat up after consuming more bread than I have in years, all over the course of a weekend, but this wasn’t the case.  It’s amazing.

You’ll also find an abundance of lamb. I don’t enjoy lamb, so I have nothing to report.  However, more than one local mentioned to me that their lamb is the “best lamb in the world.”  Apparently they are free roam, which makes them more tasty.  I’ll just believe them.

Fish are very popular as well, and you’ll find fish of many varieties across Iceland.  Arctic Char was very delicious, but as my friend would say “you can get that at Nobu.”  Yeah, because we go there all the time, you know.

If you ever have questions about Iceland or Icelandic food, simply drop me a comment below, I’m more than happy to answer any questions.

Tim Schmidt is an Entrepreneur who helps companies grow their online business. A firm believer in creating great content, he founded AllWorld.com to empower world travelers. You can also find his work published at the Huffington Post, Social Media Today, and many other online journals. His latest claim to fame is having his footage of feeding giant crocodiles in Costa Rica featured on Animal Planet. Visit his official site to learn more about him.